My thank you note to Robin Williams 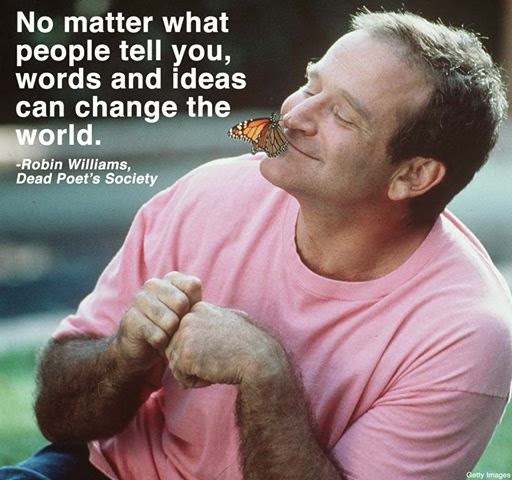 My husband called me on Monday evening. He said, “Hey where are you?” I started rambling about my day, and suddenly he said, “Are you sitting down?” His voice was different. It was soft and concerned.  I immediately walked out onto the patio and sat down. “Robin Williams is dead. They found him this afternoon. He killed himself, “ he said softly.
Suddenly, I felt like someone had shot me in the heart. I had this overwhelming emotion.  I felt silly.I didn’t know him. He wasn’t a family member. He was just a man I had grown up watching on TV and movies. Why was I crying?  Why was I sobbing?
Grant walked out onto the patio. “Mom, are you okay? What’s wrong?”
I assured him I was fine. I told him Robin Williams had died today and I was sad about it. “Who’s that, “ he asked?
Then I said, “You know the guy from “Night at the Museum, “ Teddy Roosevelt?”
“Oh yeah, he was funny!!” was all he had to say. Then he gave me a gentle rub on the back and walked back into the house.
I sat for quite a while.  I didn’t really have a choice. I felt like my legs just wouldn’t work right. As with all deaths, the finality was real. The fact that I would never see him do one of his crazy interviews again or watch him act in another move was too much to take.
Robin Williams has been one of my all-time favorites for as long as I can remember.  I have had his joke CD in my car for 10 years.  Anytime I was having a bad day (and the kids weren’t in the car), I would turn it on and feel instantly better.  My favorite skit was about Jesus’s brother Joe. I would just crack up! Somehow, after Monday, unlike the many times before, this CD won’t bring me the same happiness.  Sure, I will laugh, but it won’t be the same.
I thing that has always been so endearing to me about Robin Williams was his immense vulnerability. Sure he had a crazy potty mouth, but under it all was this amazing childlike quality. I always felt like I somehow wanted to give him a hug.
Monday night was hard. My girlfriend and I were sending text messages back and forth that only said his movies.  We could have gone all night with that game. His body of work seems endless.  Amazingly, so did my tears.  I capped my evening off with a big milkshake to ease the pain.
The next morning, my Facebook and Twitter were blowing up with the amazing tributes.  A few more tears flowed. One of the Autism websites I follow posted an article about celebrities who have Autism.  There was his picture. I clicked on it and the article explained that he was thought to have had ADHD and Asperger’s (the same diagnosis as my Hunter). I’m not one to believe in diagnosing other people.  I have no idea if Robin Williams had Asperger’s Syndrome (although the ADHD seems pretty much a given).
I never really noticed symptoms of Autism in him.  However, this article made me have a better understanding of why my emotions were so high.  I loved this man’s humor.  I loved how he could turn my mood around in a second.  He seemed like a generous, amazing soul.  Most of all, I think I felt a connection to him in a special way. He was different, just like my Hunter.  He rambled on about one topic after another, seemingly having no direction (yep, that seems pretty familiar too).  Somehow, though, it didn’t matter. He was loved and admired because he had special gifts that no one else had. He was able to take his special talents and give them back to the world in the form of an amazing body of work.  I hope the same for my son and the many kiddos like him.
Robin Williams will be missed by so many.  He obviously had pain and ultimately it was too much for him to bear, but I choose not to dwell on that today. Today, I just want to thank him for the years of joy  and laughter he brought to my life.  I want to thank him for breaking down those walls for my son, and showing the world that it is okay to be different.  Actually, he showed the world that it is amazing to be different!!!
Thank you! Thank you! Thank you!!!

Posted by Unknown at 3:05 AM No comments: