Halloween 2015-The spooky year of transition into teenagerism 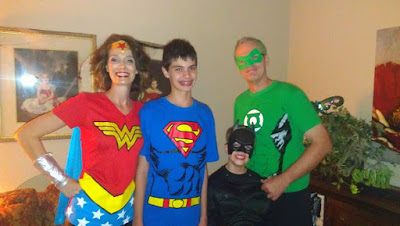 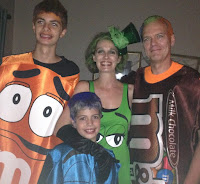 For many kiddos on the spectrum, Halloween can be very difficult. It is complete sensory overload. The costumes, candles, not to mention the sugar and food dyes galore...it can be an autism parent's worst nightmare. Early on, Hunter struggled with the candles in Jack 'o lanterns. Battery operated candles were an amazing thing for us because they didn't give him the same anxiety. Costumes were also stressful for him because he didn't like anything over his face, and they were uncomfortable. We were able to work around this by picking costumes accordingly.

Through the years, Halloween has become a very important holiday for our family. It has been a great source of fun and togetherness. It has been a great way of escaping stress and concentrating on creating memories. From the time Hunter was very young, we started having family costumes. Then, when Grant was born we continued the tradition. Since both boys were old enough to contribute, we have decided as a family on our yearly theme.

We dress our house up in Halloween silliness. I love witches hats and boots, lots of lights and candles (battery operated of course), and some sparkly skulls thrown in for good measure. In the past few years, I have added in some hanging ghouls a flying ghost, and a dancing skeleton to make things a little less "cute", per the boys' request. Everything from the costumes (including the dog's), the decorations, and the pumpkin carving is a family affair.

As Halloween approached this year, things were a little different. We had our family costume (eggs, bacon, a cook, and a waitress). The decorations inside and out were hung and lit up like a Christmas Tree. The candy was purchased. Halloween cookies (you know...the slice and bake kind) were baked over and over throughout the entire month of October. Everything was the same, except one thing...my teenage son was growing up.

For the first time ever, he mentioned going to a haunted house with his friends. I inwardly cringed. We have never really been the family who was into the scary stuff  (remember sparkly skulls). Sure we had added a few mildly scary things to our Halloween collection, but they were still fun and cute. I couldn't imagine how he would manage the over abundance of sensory nightmares that would come along with a haunted house. The darkness, loud noises, scary people...it just wasn't his cup of tea. He still hides his eyes at scary commercials. He mentioned it to me several times, and each time I would go along with his plan. I wasn't going to be the mom who kept him from trying something new. I knew I had to let him grow up and find some things out for himself.

Finally, the weekend came when his friends were going to the haunted house. On the way home from school on Friday, he asked if his dad or  I could take him. I said, "Sure...ummm...but are you sure you want to go. I mean, I was never into the haunted house stuff myself, but if you want to go, we will get you there. By the way, you know Grandma and Grandpa are going to be in town, so we might be doing something with them.  If you want to go with your friends, that's totally fine. Just let me know, and I will arrange things accordingly." Then, I took a deep breath. I wanted him to make the decision for himself. I knew he felt the pressure to be one of the cool guys. Now he had an out. He also had the ability to go if he wanted to...no pressure...

Later that evening, he came to me and said, "I don't think I'm going to the haunted house on Sunday. It's $30 and I don't want to spend that much to go. Plus, I'd rather just hang out with the family." I quietly thought to myself...I would have paid the $30, and did you just say you wanted to hang out with the family? Hath hell frozen over. Instead, I said, "OK buddy. Whatever you want to do. Just let me know if you change your mind, and we will work something out. I never heard about it again.

My hubby and I decided to have some of Hunter's buddies over the night before Halloween. He was so excited. We had the house all decorated like normal. We put black lights in every corner of the house to spook it up. We ordered pizza and stuffed them full of sugary soft drinks and candy. They watched a couple of scary movies and screamed their full heads off. Hunter isn't a fan of scary movies, but he wasn't about to tell them that. He was so excited to have his buddies around him, in his home, with dad in the room (for a little added protection haha).

That night, after everyone had had left, he walked into our room and said, "Thanks so much for doing that for me tonight. Everyone really had fun." He couldn't wipe the smile off of his face. He slept with his light on that night, but he was so very happy!

Halloween night, he wore the bacon costume. He wasn't as excited as normal to put it on and run out the door to trick or treat, but he wore it and thought he was pretty cool. Late that night, Grant, Hunter, and my hubby had a candy lottery... otherwise known as my husband's way of stealing the kid's candy. I just left that between the boys, as I sat back and drank my glass of wine. Cheers to a Halloween that was a little scarier than normal, for many reasons, but also pretty amazing! 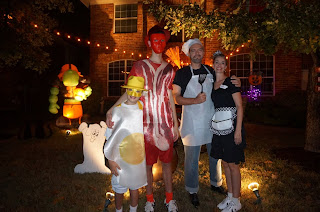