At Sassy Aspie Mom, I'm about keeping things real. That's why I  love to share other bloggers who tell their stories in such an open and honest way. Today,  I am thrilled to have Jessica, from My Extraordinary child, as my guest blogger. You will truly enjoy reading her story below and make sure to visit her website http://www.myextraordinarychild.com/.

He is My Teacher

Yesterday was the kind of day that had brought so much emotion.  Maybe it had more so been the series of events leading up to it, but either way that is where I had arrived.  It was time for our night time routine and my son had earned a sleepover with me since he had enough stickers.  Now don't judge I am desperately trying out new things to encourage positive behaviors.  This is our new method.  Negative reinforcement just gets lost, there have been way too many treats given out, and this is what I have left.  Anyway, after spending over an hour trying to convince him to clean up all the money from Monopoly that covered my kitchen floor, it was most definitely time for bed.

Every night I do our usual prayer and sayings and last night was so different.  I try to mix them up for a reason, but just trust me that this doesn't ever go unnoticed when I do so.  After we went through it all I decided to just lay with him until he fell asleep.  It's not that I don't or haven't had concern that my son has been diagnosed with ASD, it's that some days it just hits all over again.  As we lay there we talked about sounds of the house and why he couldn't sleep.  He mentioned sounds I hadn't even noticed.  As he communicates more it all becomes so much more clear to me.  I watched him as he went through all his stims.  First he made shapes with his fingers, put his fingers over his eyes, and made specific movements with his mouth. He did it all on repeat yet looked over and smiled at me in between.  He even said "I love you in Polish."  I was trying to teach him how to say I love you in polish earlier on yesterday, but he took it quite literally and now that is exactly what he says, "I love you in Polish."  My heart melted and in that moment I just felt tears streaming down my face slowly.  I just stayed there watching him try to sleep and was thinking about all he goes through each day, let alone all he battles just to fall asleep.

At one point he looked back over at me, and as it became clear that he had no reaction to my tears, I cried even harder. There are days I worry for him and for those he will encounter along the way.  I know that he is simply an amazingly beautiful and brilliant child.  My worry at times is how the world will effect him?  Then I think about what he tells me. He tells me that he is teaching his therapists how to play with toys.  He probably does see it that way and wonder at times what is wrong with the rest of us?  Why are we doing such strange things?  Why do we not notice what he does?  Why don't we see what he does?  It makes me laugh when I think about it.  While I spend my days trying to teach him about the world, he has taught me far more in just three years than I could ever teach him.

I am so grateful to get the opportunity to raise such an incredible child.  If I had half his strength, point of view, or listening skills I would be far better person than I am today.  In moments like that, it's when it all clicks again.  He is my teacher.  While I may be helping him in some ways, what he has taught me is far more than I could ever teach him.  Times like this always repeat and they are needed. The truth is that today I am humbled and I will be one day again.  How did I ever get this lucky?  Sometimes it's clear that I don't need to ask how the world is going to affect him, I need to ask how he is going to effect the world.

Of course this blog called for one of my favorites.  A little JJ Heller.
Posted by Unknown at 11:07 AM No comments:

She never gives up


Imitation: the assumption of behavior observed in other individuals.
Examples: Children learn by imitation of adults.
Charles Caleb Colton said, "Imitation is the Sincerest Form of Flattery." Nothing can be more true than when the imitation comes from your child.

At school, for Mother's Day, Grant (my NT, 9 year-old son) was asked to write some things in a card to describe his Mom. He wrote many sweet things in this card about me cheering for him at baseball games, volunteering for the PTA, writing a blog, but the one thing he said that touched my heart was, "She never gives up." I actually cried as I read this handmade treasure.

Later, when it was just he and I together, I asked him what made him say that about me. He said, "Because when something is hard in life, you work and work until you figure out how to get it done right, and when things get hard with Hunter (my 14 year-old son with Asperger's), you keep going. You never give up on him."

This little boy never ceases to amaze me. I feel like he has endured so much, yet he is so happy. Living with an older brother on the spectrum is not always a cake walk, especially when Hunter is in his not-so-fun teenage years, and you are his younger brother i.e. punching bag. There are days Grant struggles with it, but most days, he takes it in stride. He has dealt with his dyslexia like a champ and moving from Indiana to Texas like he had done it a million times. Day in and day out, he has such a zest for life. He has a contagious belly laugh and an amazing intuitive gift for being able to make everyone around him feel better. I could learn so much from imitating him.

Grant was diagnosed with dyslexia in first grade. Last year, in second grade, he was struggling. He was a year into his diagnosis and frustrated. He was down on himself. He felt dumb. It saddened me to see him so broken. I would read to him everyday, and have him read to me. It wasn't always fun. He fought me tooth and nail most days. At the beginning of this school year, something changed. He wanted to read. He was actually getting in trouble at school for reading during class. His teachers were amazingly encouraging. His confidence peaked. The boy turned into an avid reader. By the end of this school year (3rd grade), he was reading at a fifth grade level... and once again I cried. 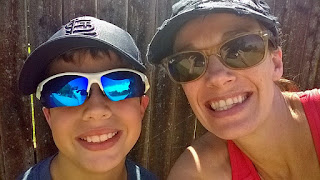 In June, we always go home for the "Sommerfest" in my home town in Indiana. On the Saturday morning of the 3-day event, there is a 5K walk/run. Our family always participates. In the past, Grant was just too small to walk that far, so he would do the much smaller run for the younger children. This was his last year to do that run, but when I went to sign him up, he said, "I want to do the walk with you guys this year." I warned him that he would need to get conditioned in order to walk that far since he's not used to doing it. He assured me he would, so we decided to start walking on Monday morning.

Sure enough, on Monday morning (the first day of summer break, no less), before I'd had my first cup of coffee, I was met with Grant in his running shoes. He had his sunglasses on and a water bottle in his hand. We started out slowly, with a mile. Then a mile and a half. We walked every morning until we left for our trip. On the morning of the walk, he was up and ready to go. He walked that 5K like a champ, and when he was all done, he looked at me and said, "I didn't give up."

Sometimes I wonder if I am making an impact on my kids lives. I worry that I am not doing enough to guide them in the right direction. I often wonder if I am equipping them with the right tools to maneuver this difficult world. After all, parenting doesn't come with a manual. Then, Grant finishes that walk, learns to read, and reaches his goals because he "didn't give up". I know I'm making a lot of mistakes along this journey, but I actually got this one right!