Pretty sure I was screwing it all up

We had moved from Texas to a small town in Indiana. In the process of selling our house and moving back, he had lost his Great-Grandmother and our sweet dog. Moving meant separating him from the friendships he had acquired while in Texas. Then, we had moved into my parents' house while we built ours, allowing him no privacy. 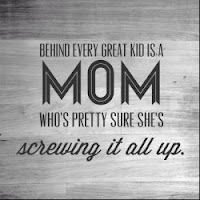 We moved into our new home in March. Finally, we were able to get him into his own learning space and really give the online schooling a real shot, but we were almost done with the school year. By this time, he was emotionally unreachable. He was still angry about the move; the new house, the loss of his friends in Texas. He hated me. The idea of working with me to accomplish academic success was just a joke. He was living his life to make mine hell. At least that was the case when I could actually get him out of bed.

During this time, I began to question myself, my parenting decisions, my life choices, basically everything I thought I knew seemed up in the air. I had wanted to move back to this small town where I had grown up. I wanted to give my sons the same sense of self and security that I had been given.  I wanted them to grow up knowing that family is always there and your neighbor is truly your friend. I wanted this so much for them, that maybe I had overlooked what was really best for Hunter.

Once again, this parenting thing did not come with a manual...I was pretty sure I was screwing it all up!

Posted by Unknown at 1:18 PM No comments: