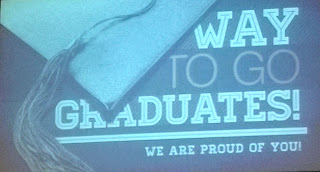 He did it!!! He passed 8th grade!!! As I waited for the ceremony to begin, I couldn’t help reflect on the difficulties we had been through in the past 9 months. As I mentioned in my previous post, this school year has been very difficult. We switched Hunter to a new school because the public school he was attending just wasn’t working. The kids were not loving and excepting of one another. He felt like he didn’t fit in with the other kids. He felt different. We knew we needed to make a change, so we did. The school we chose was much more academically challenging for him, which wasn’t great, but the kids at his knew school were amazing. When we toured the school, we noticed the commodorey between the students and teachers. The atmosphere of the school was refreshing.


The students at the new school loved Hunter from Day 1. He felt excepted. He knew he could be himself. As his Mom, it was amazing to watch him grow and not feel stifled by the typical middle school status quo. Throughout the year, he would yell at me for “doing this to him, " when the work was hard. I took it with a grain of salt because I saw an amazing change in him. Yes, the homework was difficult. He wasn’t able to keep up with every expectation the school had of him. It was frustrating at times. Through it all though, he was learning a much more important lesson. He was learning to love himself.


Tears welled in my eyes as they called his name. I watched him strut across that stage with a new found confidence to receive his diploma. The students cheered loudly, chanting his name. These students didn’t see my Hunter as a kid with Asperger’s. No, there was no label put next to his name.  Instead, they saw my Hunter as cool, quirky, funny, tall, and I’m guessing some of the girls found him pretty darned cute (I would totally be embarrassing him right now). Yes, the teacher, parents, and grandparents in that room had taught the young men and women many things, but at this moment , the students were teaching all of us so much more.

Posted by Unknown at 8:39 PM No comments:

Sometimes you have to throw up the white flag and say “enough”!

The past few months have been really difficult around our house. Hunter has been shutting down, slowly but surely.  Things became much worse when we returned home from my Grandmother’s funeral in March. I don’t know if it was her death; the fact that it was around spring break; the extra week off because of our trip for the funeral; the break in his routine; or that  state standardized tests were the week we came back. I really don’t have any answers. I only know that he had given up.


He began eating sweetener and sugar by the truckload, which is his typical sign of distress. He began scavenging for any and every kind of food he could find in the house, whenever we weren’t looking. Then, he kicked out the windshield to my car. He kicked out the windshield because I asked him if he ate my M&M’s I had hidden in the cabinet (don’t judge, sometimes a girl needs chocolate to survive). That’s all I asked. That’s what caused him to take his size 14 shoe and kick it through the windshield of my car.


Does he have rage issues? No, not normally. He talks back quite often. He will push his brother sometimes. He might tear up a piece of paper if he gets mad or throw something, but cause destruction to this magnitude, this was a first. What caused this sudden burst of anger?  I don’t have any explanations, other than he was just at his breaking point.


I didn’t know what to do. I had fear. He is 6’ 5” tall and weighs what I do. Could he hurt me? Absolutely yes, he could seriously hurt me. Would he? I truly believed he wouldn’t, but I wasn’t going to take the chance.


I immediately spoke with his resource teacher, explained what was going on in our home, and basically told her I didn’t have anything left, and I wasn’t willing to take the chance of him hurting me or his brother in another fit of rage. I immediately gave up the nightly struggle of homework and trying to decipher if he was telling me the truth about his workload. I began asking him if he had homework and then taking him at his word, even though I knew he was being dishonest most of the time. I surrendered.

I let the feelings of inadequacy go. I had to for me, for him, and for our family. The nightly struggle wasn’t worth it anymore. He needed the break and so did I, so we took it. Meanwhile, I hoped and prayed that he would pass 8th grade. I went through 8th grade myself and now I felt like I was trying to pass for a second time. I didn’t have a third time in me. Guess what…he passed! WE did it! 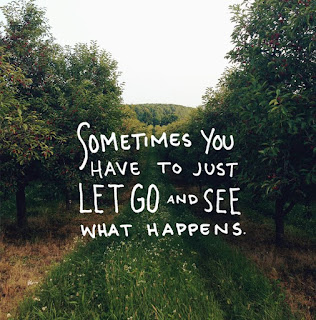 I believe life is constantly teaching us something if we will just stop long enough to learn from it. What did I learn from this? I learned that there are times when it is okay to stop fighting. Sometimes you have to throw up the white flag and say “enough”! This time it was essential for my sanity and safety. It was also good for him. I tend to hold his hand and lead him through life, but sometimes it stifles him. I needed to step back in order for him to grow.
I thought long and hard about sharing this story with all of you, but the truth is, this is our life. It is the never ending feeling of confusion, the constant feeling that the floor might drop out from under your feet at any given moment. Never knowing what is around the corner is mentally exhausting. Not having any answers or any true way to help your child cope with these emotions he has trapped inside is frustrating beyond belief. It is hard to know when to hold his feet to the fire and when to let things go; when to teach, and when to let him learn on his own. This time, I surrendered and the world did not  come to an end. Instead, I could breath again, and so could he. Another life lesson learned.
Posted by Unknown at 8:10 PM No comments: