The struggle was real

Our new living arrangements were tough on all of us, but they were the hardest on Hunter. The move, itself, was so much change, which has always been a struggle for him. He had no privacy, so he felt confined. He also needed to stem. Stemming helps him to relax and think more clearly, and it was very difficult for him to do in our cramped space. Plus, at 6’6” tall, stemming upstairs made my parent’s 100 year-old house feel like we were having an earthquake, so he didn’t feel like he could do much of it. This caused his stress to build. As the summer began to come to a close, we were all in desperate need for some personal space. We were chomping at the bit to get the house done, but it was moving at a snail’s pace.
By early August, we were leaving the summer fun and getting into the swing of the new school year. This school year brought about lots and lots of change. Grant was starting a new school as a 5th grader. It is a small town, so things tend to be a little “clicky”. Most of these kiddos had been together since pre-school and he was the new kid. It wasn’t always easy. Plus, by 5th grade, hormones are kicking in hot and heavy, so there were tons of emotions being thrown around…girls, jerky kids, tears, anger…it was a mixed bag. 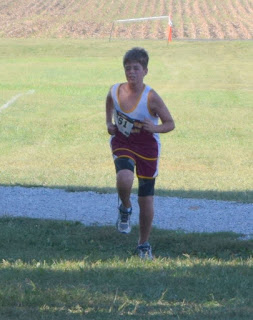 He joined the cross country team, which really seemed to help him feel like he belonged. He’s not a runner and his endurance wasn’t always there, but he stuck with it.  Math in Indiana is taught substantially different. He had always been great at math, and he suddenly found himself struggling. It really took a toll on his self-confidence.
For Hunter, the school changes were immense. When we decided to make the move back home, we knew that school choices were going to be tough. In our small community, there is only one high school. It is small, which is great, but we just weren’t sure the environment would be right for him. He has always been integrated into the classroom, with an aid and a few accommodations. Schoolwork is tough for him because it’s just not his thing.
The social aspect of things were where we were really concerned, though.  He was coming from a small charter school outside of Dallas, where all of the kids were a little eccentric in different ways. I always joked that it would have been The Big Bang Theory characters high school. It was nice because there were kids from all walks of life; with different interests and with all different educational backgrounds. At first, Hunter felt like he really fit in there. He was on the basketball team. He would go out with his friends to someone’s house or the mall. For a while it was great, he felt like one of the gang. Then, one of his friends moved away, and it all started falling apart. He was no longer getting invited to things. He felt excluded and his heart was truly broken. As his mom, I wanted to call up these kids and give them a piece of my mind, but that wouldn’t have made him look any cooler. Before the end of the school year, we had tried to host some events at our house. The guys came, but Hunter still wasn’t invited to their events. By the time we were leaving Texas, he was ready for a new start.
Moving to a small high school where everyone is rather “clicky” made us very nervous. If he didn’t fit into the Big Bang Theorish High School, than it was going to be hard as hell for him to fit into the small town school. I started looking for options and came across an online public school. It would allow him to take his classes from home, using a Skype-like systems. I wouldn’t have to be his teacher, which would never work. He would have his own teachers and counselors and online homeroom. I would just be like a coach to keep him on track. We made the decision to make this change. He was really excited about the prospect. His social anxiety had been so high about starting a new school with tons of kids he did not know, especially after what he had endured from his peers at school in Texas.  This option seemed to ease his burden.
The beginning of the school year was full of change for all of us. We were still living with my parents. My hubby was still trying to work from home off of my parent’s dining room table. Grant was dealing with the pre-teen stuff and being the new kid at school. Hunter was suddenly at home with me every day and trying to adjust to his new online school, and I found myself in the role of educational coach. All of this was taking place while we were just trying desperately to get into our new house without  losing our stuff...the struggle was real...

Posted by Unknown at 9:24 AM No comments:

I got by with a little help from my friend, Merlot

The wait for the build was not easy on our family. We were living with the stress of everything building a home entails. We were fortunate to have the entire upstairs of my parents’ house to use as our little domain, but there were no doors, and the boys were sharing a room for the first time in a long time. There was no privacy for any of us. At times, the boys wanted to kill each other, and I so wanted to shut the door every once in a while. I desperately wanted to have some time to myself. My hubby was trying to work from my parents’ house with no peace and quiet. It was tough at times, but we made it work.

We tried out best to adapt to our new living arrangements. We tried to go to a family dinner once a week.  It got us out of the house for a while and allowed my parents to actually have their house back for a few hours. I felt so badly for them. We were taking over their house. They were being so gracious. We tried to give them their space in the evenings, and we tried to stay in our little area. We watched a lot of TV; read a lot of books; and took tons of golf cart rides on our new cart (one of the advantages of our little town.) I also got by with a little help from my friend, Merlot. 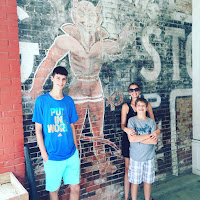 It was great to be just down the road from the build, so we could keep an eye on everything and watch the progress as it happened. However, with the long delay due to the rain, we suddenly found ourselves frustrated and overwhelmed looking at the cement pond every-single-day. We decided we needed to get away. We decided to take a little trip to a place called French Lick, Indiana. It is a quaint little town with a ton of history and a hotel with a waterpark.  It wasn’t too far away, so we took a little long-weekend excursion. 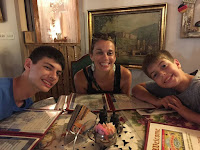 The trip was amazingly therapeutic for all of us. It got our mind off of all the crazy and just allowed us to have some family fun. We stayed at the waterpark for a couple of days; went to an elephant retreat (which was an amazing experience); played laser tag; went on a walk through the town; and ended our quick trip with go-kart racing.
It was a great trip, and we had some much needed family bonding. After all, it had been a crazy few months filled with tons of change. It was so nice to have just the four of us again. We talked and laughed and forgot our troubles, even if it was only for a short time.

Posted by Unknown at 3:33 PM No comments: