Things were feeling real with the move. Not only were we moving 14 hours, back to my hometown, a stones-throw from my parents, but the move would entail us living with my parents for the next 6 months (which turned into 9). My husband and I, our two kids, and the 50 pound dog, were moving into my parent’s house. I was 40 and hadn’t lived at this house full-time since I was seventeen. It was going to be interesting.
The lot my parents had offered to us had an old, dilapidated house on it, so my dad took care of getting it torn down, so by the time we arrived back in Indiana, the lot was ready for the house. However, the plans weren’t ready.

Before the move, we had started working with a builder. I knew what we needed in a house, so one day I sat down with some graph paper and got creative. In a matter of a few hours, I had drawn our dream house. It had everything we needed as a family...a game room for the kids; a kitchen large enough to entertain my large, extended family; an office for the hubby; a quiet place for me to write; and doors big enough to fit our wheelchairs down the road (because I’m never moving again).


The most important part of the house plans was a large area over the garage with its own private staircase through the mudroom. It would be stage 2 of the building process, but as all parents of kiddos on the spectrum know, we always have to be one step ahead of the game, so this was our way of planning for the future. Hopefully, all goes well and Hunter starts an independent life of his own and this area becomes a man cave or storage. As him mom, this is what I hope and pray and work tirelessly to make sure happens, but if not, plan B is available.
Once we arrived home, we had to finalize the plans. We thought this would be a quick process, but the few drafts of plans took longer than we anticipated. We moved home the last weekend in May of 2016 and the build finally started the last week in July of 2016. It felt like it took forever! Did I mention we were living with my parents? Things at home actually went fairly smoothly. Everyone was pretty patient with each other, but we were joining two homes…two completely different homes with different schedules and routines and ways of living…and it wasn’t always easy. We were all growing impatient. 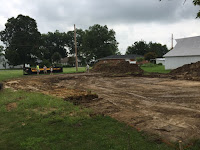 The building could not start soon enough, but when it finally happened, it could not have been more exciting, not just for us, but for the entire town. On July 26th, the crawl space was dug. Then, the rain began to fall and continued for almost 2 weeks. 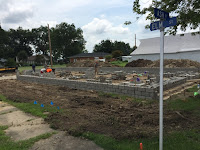 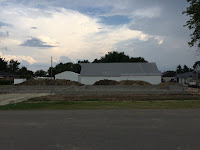 They were able to get the blocks laid on August 2nd. We could have sold tickets to the event. Cars would drive by at a snail’s pace and the golf carts (did I mention they are legal on the streets in our little town) had their own little parade up and down our street daily. It was fun to watch it.
We were all so excited after our day of watching the block layers, that we decided to celebrate. Mom and Dad took us out to Applebees... 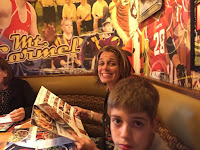 I love this picture because it shows the pure exhaustion that was being felt at the time (notice the large circles around my eyes). We were excited, but too tired for it to show.
The excitement only lasted so long, because blocks soon made a beautiful border to hold in the rain. We soon had  a swimming pool as the rain continued to fall. The weather not only delayed us, but it changed the schedule of all of our contractors who were trying to finish other jobs, so the wait continued…

Posted by Unknown at 3:20 AM No comments: