When Hunter was around three, we put him in t-ball. His coordination wasn't the best, but we hoped that he would enjoy the sport, and it would help him with his socialization. I just really wanted him to have fun. Instead, the frustration of not being able to hit the ball was just exhausting for him. It was just too much. We tried for a few seasons, but it just wasn't getting any better, so his baseball playing days came to an end.

When he was around 4, we decided to try soccer. Because the hand/eye coordination was not as essential, we hoped that maybe soccer would be fun for him. I can still picture the first soccer game. The other kiddos were kicking the ball and running toward the goal. Our little guy was stemming 10 feet away from everyone else. He was having fun. In in mind, he was playing, but he wasn't really participating in the game. We decided that maybe soccer wasn't his thing.

Luckily, he is a very tall boy, so basketball seemed to be a better fit. Once he got into elementary school, we signed him up. What he lacked in motor skills, he made up for in height. All he had to do was put his arms in the air for a block and nothing was getting by him.

I knew the chances of him making the school teams were unlikely, so I kept him engaged in recreational basketball. Unfortunately, last year was his last year because he aged out. I knew that we would have to start finding more social activities.

At the beginning of the school year, he got in the car one day after school and said, "I want to join the football team." What? You are 6'2" and 130 lbs!!! My momma bear instincts stepped up and I said, "There is no way you are setting foot onto that field!!"

When my hubby got home, his response was very similar to mine. For the next several days, his unwillingness to give up wore us down, little by little. Apparently, the students didn't have to try out for football. He knew he would make the team. He really wanted to fit in with the other kids.

Finally, we gave in, and $200 later worth of extra padding, an extra big mouth guard, and any other safety equipment I could throw in the cart, my boy was a football player. Every day when I picked him up from practice, I would breathe a sigh of relief when he hopped into the car with no arms or legs broken and no major cuts or bruises.

The day of his first football game arrived, and I am sure I was more nervous than him. Butterflies were having a dance party in my stomach. My husband had taken our youngest to a little league game, so I sat in the stands by myself. Flashbacks were running through my head of my little boy on the baseball fields and soccer fields. I just wanted him to have fun. I wanted him to feel cool and fit in with the other guys. I wanted him to not get hurt. Instead, he never played in the game.

He was so defeated. He was so angry and down on himself. It was awful to watch him suffer. This was no longer little league or 4 year-old soccer. This was a teenage boy who already didn't feel cool enough to fit in with the other kids and now, it was worse.

I would love to say that this only happened once, but it happened three more times. My momma claws didn't have to come out because pappa bear stepped in and made a call to the coach. If you are going to let all the boys on the team and have them practice every day, then you have to give them a little playing time (especially when you are winning every game by a landslide)!! 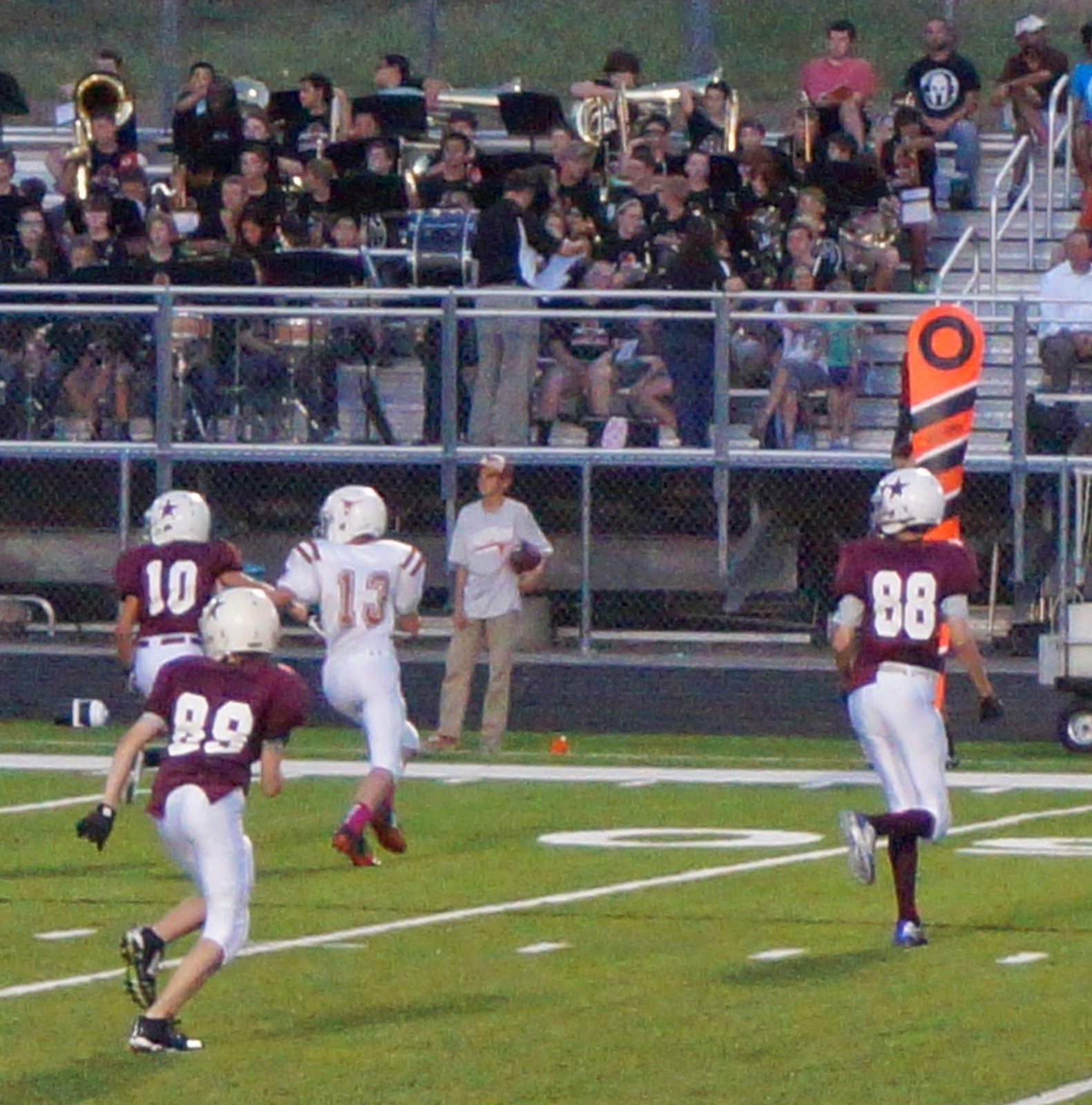 Needless to say, they started putting him in the game. It was only for a play here or there, but it didn't matter, he was playing football. Every time he would step onto the field, we would reach for our phones and cameras and capture each and every moment. I would hold my breath. I would pray he wouldn't get hurt. He didn't. Instead, he would walk off the field with a little more swagger. He would hold his head up just a little higher.

When the final game of the season came, and he took his final step onto the field, I leaned over to my husband and whispered in his ear, "Take this moment in. You may never see this again, so take it in..." Tears welled in his eyes.

After the game, Hunter strutted off the field. He was so proud of himself. He felt good. We have the pictures to prove that he played middle school football. Man, was I glad he didn't get hurt. All of it was surreal.

After the game, as we were walking to the car, Grant (his younger brother) walked up to him, patted him on the back and said, "You were amazing Hunter!"....and the tears rolled down my cheeks.

Yes, raising a child with Aspergers Syndrome can be tough. There are days that it can rip your heart right out of your chest, but there are other days that your heart soars! Those are the days you don't forget. 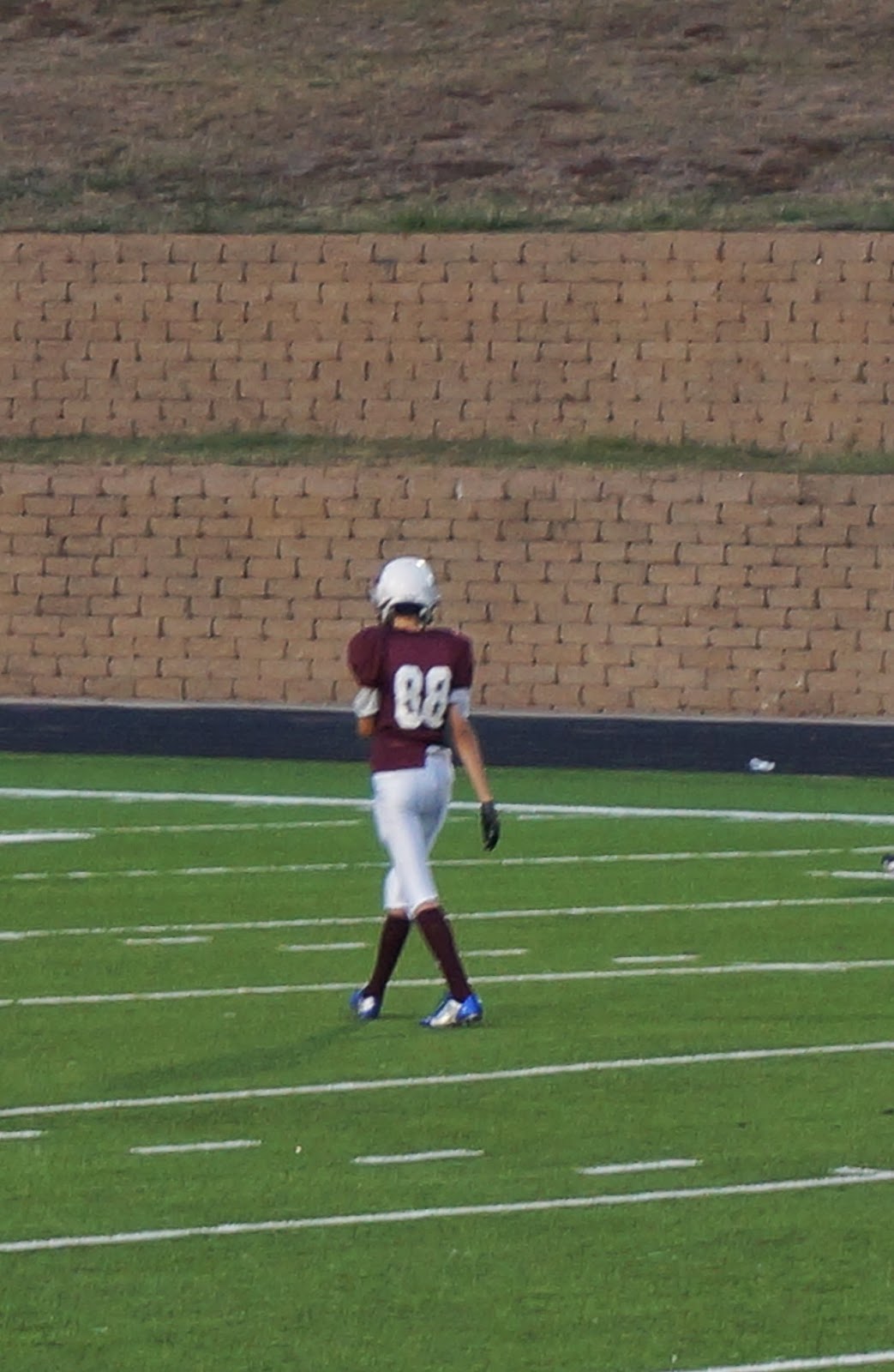